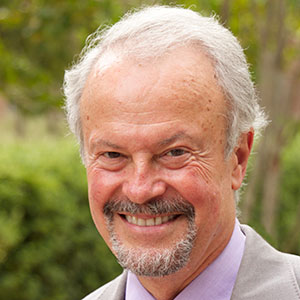 Human rights activist, pioneer for racial equality, internationally recognized expert on sports issues, scholar and author Richard E. Lapchick is often described as “the racial conscience of sport.”  He brought his commitment to equality and his belief that sport can be an effective instrument of positive social change to the University of Central Florida where he accepted an endowed chair in August 2001.  Lapchick became the only person named as “One of the 100 Most Powerful People in Sport” to head up a sport management program.  He stepped down as department head in the Spring of 2022 to focus all of his activities on anti-racist and anti-sexist work. He remains as the Director of The Institute for Diversity and Ethics in Sport (TIDES) and President of the Institute for Sport and Social Justice (formerly the National Consortium for Academics and Sport) and helped bring their national office to UCF.

The DeVos Sport Business Management Graduate Program at UCF is a landmark program that focuses on the business skills necessary for graduates to conduct a successful career in the rapidly changing and dynamic sports industry.  In following with Lapchick’s tradition of human rights activism, the curriculum includes courses with an emphasis on diversity, community service and philanthropy, sport and social issues and ethics in addition to UCF’s strong business curriculum.   The DeVos Program has been named one of the nation’s top five programs by the Wall Street Journal, the New York Times, Forbes and ESPN The Magazine.  In 2009 it was named the nation’s top MBA program for service. In 2015 SportBusiness International named DeVos as the #2 graduate sport business management programs in the world.

Under Lapchick’s leadership, the DeVos Program launched The Institute for Diversity and Ethics in Sport (TIDES) in December 2002. The Institute focuses on two broad areas.  In the area of diversity, equity and inclusion, the Institute publishes the critically acclaimed Racial and Gender Report Card, long-authored by Lapchick in his former role as Director of the Center for the Study of Sport in Society at Northeastern University. The Report Card is an annual study of the racial and gender hiring practices of the NBA, WNBA, NFL, Major League Baseball, Major League Soccer, college sport and the sports media in the United States, The Report Card shows long-term trends over several decades and highlights organizations that are notable for diversity in coaching and management staffs. In the wake of the racial reckoning in 2020-21,TIDES has been engaged to do new Report Cards on NASCAR, the NHL, the US Olympic and Paralympic Committee and numerous college conferences including the West Coast Conference and the Big East Conference.

Shut-Out Trafficking is the Institute for Sport and Social Justice’s (ISSJ) effort to combat human trafficking with week-long programs on ISSJ campuses starting in 2014-15 engaging student-athletes, students, coaches, athletic administrators, and faculty to help inform their campuses about this huge issue.  Doing programs on 41 campuses, SOT engaged more 71,000 students, student-athletes, faculty and administrators on those campuses.

In December of 2006, Lapchick, his wife and daughter and a group of DeVos students formed the Hope for Stanley Alliance which organizes groups of student-athletes and sports management students to go to New Orleans to work in the reconstruction efforts in the devastated Ninth Ward.  As of the spring of 2022, Hope for Stanley members have spent 58 weeks working on rebuilding more than 155 homes.  Lapchick was named an honorary citizen by the New Orleans City Council in October 2007.  HFS has also worked with tornado victims in Tuscaloosa, AL, in New York with the victims of Hurricane Sandy, in Houston after Hurricane Harvey and in the Florida Panhandle after Hurricane Michael.

Lapchick helped found the Center for the Study of Sport in Society in 1984 at Northeastern University.  He served as Director for 17 years and is now the Director Emeritus.  The Center has attracted national attention to its pioneering efforts to ensure the education of athletes from junior high school through the professional ranks.  The Center’s Project TEAMWORK was called “America’s most successful violence prevention program” by public opinion analyst Lou Harris.  It won the Peter F. Drucker Foundation Award as the nation’s most innovative non-profit program and was named by the Clinton Administration as a model for violence prevention.

Lapchick also helped form the NCAS (now ISSJ) in 1985.  It became a group of over 280 colleges and universities that created the first of its kind degree completion and community service programs.   More than 33,900 athletes returned to ISSJ member schools.  Over 14,985 graduated.  Nationally, the ISSJ athletes worked with nearly 19.9 million young people in the school outreach and community service program, which focused on teaching youth how to improve race relations, develop conflict resolution skills, prevent gender violence and avoid drug and alcohol abuse.  They collectively donated more than 22 million hours of service while member colleges donated more than $300 million in tuition assistance.

The Center and the National Consortium for Academics and Sports (renamed the Institute for Sport and Social Justice in 2018) created the MVP gender violence prevention program that has been so successful with college and high school athletes that all branches of the United States military have adopted it. In 2015, it trained more than 30 teams in the NBA and Major League Baseball. MVP was rebranded HUDDLEUP to End Gender Violence in 2017.

Through the Teamwork Leadership Institute, the ISSJ provides diversity and inclusion management training to sports organizations, including athletic departments and professional leagues and teams.  The ISSJ has already conducted such training for the NBA, Major League Soccer, ESPN, NASCAR and more than 100 university athletic departments.

Lapchick was the American leader of the international campaign to boycott South Africa in sport for more than 20 years.  In 1993, the Center launched TEAMWORK-South Africa, a program designed to use sports to help improve race relations and help with sports development in post-apartheid South Africa.  He was among 200 guests specially invited to Nelson Mandela’s inauguration. He attended the funeral service for President Mandela in December 2013.

Lapchick is a prolific writer. He is the author of 17 books and more than 600 articles.   He has given more than 3,000 public speeches and has spoken in the US Congress, the United Nations, the European Parliament, and the Vatican.

Lapchick has been the recipient of numerous humanitarian awards.

In 2021, Lapchick was chosen as the Muhammad Ali Humanitarian of the Year by the Muhammad Ali Center.  He also received the Arthur Ashe Institute Leadership Award in recognition of his trailblazing work and dedication to diversity and social justice.

In 2022, he was named the Central Floridian of the Year by the Orlando Sentinel.  Lapchick was presented with the John Carlos and Tommie Smith Social Justice Champion Award. He was also named the Champion of Courage by Harbor House, Central Florida’s leading group working against domestic violence. He received the Legacy Award from Heart of Florida United Way. Lapchick won the John and Martha Hitt Honorary Alumni Award.

In 2012, Lapchick was honored by the Holocaust Memorial Resource and Education Center of Florida at its annual Dinner of Tribute.  He also received the Champions Award from the Alliance of Women’s Coaches, the only male to receive the award in 2012. The Black Coaches Association presented Lapchick with their Distinguished Service Award which was only the 2nd time they presented this award in 28 years. Lapchick received the Mannie Jackson Human Spirit Award at the 2012 Basketball Hall of Fame enshrinement ceremonies.

In 2013, the National Association of Black Journalists gave Lapchick their Pioneer Award.  In 2014, the National Basketball Retired Players Association gave Lapchick, Bill Russell and Pat Summit their Life Achievement Award. Lapchick was inducted into the New York City Basketball Hall of Fame in 2015 where he joined his legendary father, Joe Lapchick, as the only father-son combination inducted in the New York City Basketball Hall of Fame. He was named as one of Beyond Sports Inspirational 50 people (living and passed) who used sport to change the world along with Billie Jean King, Muhammad Ali and Nelson Mandela. In 2016, he was honored by the Harvard Medical School with the Harvard Impact Global Health Catalyst Distinguished Leader Award for his work in diversity and inclusion. The NCAA named Lapchick as its “Champion of Diversity” in 2017.

In 2009, the Rainbow/ PUSH Coalition and Rev. Jesse Jackson honored him with “A Lifetime Achievement Award for Work in Civil Rights.” Reverend Jackson and the Rainbow/ PUSH Coalition honored him again in 2018 with the Rainbow PUSH Distinguished Service Award.   Lapchick won the Diversity Leadership Award at the 2003 Literacy Classic and the Jean Mayer Global Citizenship Award from Tufts University in 2000. He won the Wendell Scott Pioneer Award in 2004 and the NASCAR Diversity Award in 2008 for leadership in advancing people of color in the motor sports industry, education, employment and life.  He received the “Hero Among Us Award” from the Boston Celtics in 1999 and was named as the Martin Luther King, Rosa Parks, Cesar Chavez Fellow by the State of Michigan in 1998.  Lapchick was the winner of the 1997 “Arthur Ashe Voice of Conscience Award.”  He also won the 1997 Women’s Sports Foundation President’s Award for work toward the development of women’s sports.  In 1995, the National Association of Elementary School Principals gave him their first award as a “Distinguished American in Service of Our Children.”  He was a guest of President Clinton at the White House for National Student-Athlete Day in 1996, 1997, 1998 and again in 1999.

He is widely known for bringing different racial groups together to create positive work force environments.  In 2003-04 he served as the national spokesperson for VERB, the Center for Disease Control’s program to combat preteen obesity.

Lapchick also consults with companies as an expert on both managing diversity and building community relations through service programs addressing the social needs of youth.  He has a special expertise on Africa and South Africa.  He has made more than 35 trips to Africa and African Studies was at the core of his Ph.D. work.

Before Northeastern, he was an Associate Professor of Political Science at Virginia Wesleyan College from 1970-1978 and a Senior Liaison Officer at the United Nations between1978-1984. He was the Director of the Emergency Committee for African Refugees during the height of the conflict between Ethiopia and Eritrea.

Lapchick is a board member of the George Floyd Memorial Center, United Abolitionists, and the onePULSE Foundation. He is an Emeritus Board member of the Women’s Sports Foundation. He was a board member for the 2022 Special Olympics USA Games. He is on the advisory boards of ESPN-W, the Positive Coaching Alliance, Champion Women, the SEED Project, the Sports Leadership Council, the Collegiate Coaching Diversity Pledge Board of Advocates, the Social Justice Coalition, ABIS (the Advancement of Blacks in Sport) and the Giving Back Fund.  He is a founder of the Hope for Stanley Alliance and Shut Out Trafficking.

Richard is the son of Joe Lapchick, the famous Original Celtic center who became a legendary coach for St. John’s and the Knicks.  He has been married to Ann Pasnak since 1989.  They have a son, Joe, and two daughters, Chamy and Emily.  Rich and Ann have four granddaughters: Taylor, Emma, Molly and Lauren.