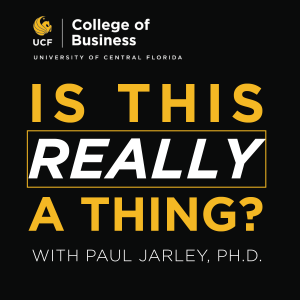 Paul Jarley:                         Russian hackers aren’t just messing with our elections, they’re disrupting the job application process, too. Companies like IKEA and Pepsi are hoping artificial intelligence will help cut hiring costs, but all this new technology may just be leading to more incivility in the job market. Prepare to be ghosted, my friends.

Paul Jarley:                         This show is all about separating hype from fundamental change. I’m Paul Jarley, dean of the College of Business here at UCF. I’ve got lots of questions. To get answers, I’m talking to people with interesting insights into the future of business. Have you ever wondered, “Is this really a thing?” On to our show.

Stefanie Hill:                     I think with technology, there are so many platforms now and, depending on the business, you’re not paying for every single platform.

Paul Jarley:                         That’s Stefanie Hill, a Career Coach in our Office of Professional Development. She’s explaining how greater use of technology in the applicant screening process is leading to more ghosting by employers.

Stefanie Hill:                     An applicant tracking system is what employers use to track all of the applicants that come through and apply on their website. If you’re using that ATS, that’s great, but you have to drive traffic to you website, which a lot of employers don’t pay for extra marketing to do that. You’re gonna go on CareerBuilder, you’re gonna go on Indeed. If your organization doesn’t shell out thousands of dollars to pay for these different platforms, then they’re not communicating with your ATS. In that instance, you’re going on three different platforms. You would have to send rejection letters to all three different platforms, depending on who applied on which, and a lot of times with all of those applicants it’s hard for employers and recruiters, especially, to keep track of all of that

Lina Pabon:                        I would never. Even if I had a friend who was interviewing or something, I would even be like, “Well, that was my experience with them?” Just as an FYI. It’s definitely a negative thing, especially at the level I was at. You’re telling me I’m moving to a second round, and then I never hear back. That’s not professional on their end.

“Casper”:                            Yeah, yeah, exactly, exactly. I had a recruiter contact me saying, “Entrepreneur is looking for me to report to the CEO.” I mean, I’m flattered, but I just graduated with my accounting degree. Those things don’t add up. I’m suspicious. Whenever you just know it’s not really worth your time, it’s easy to just pass up on it.

“Casper”:                            More reputable ones. My first urge, a lot of times- For example, on my LinkedIn, on my header it says, “I’m looking for public accounting in this market. I graduated here.” I would get offers on LinkedIn like, “Hey, we want to interview for this management training role in Orlando starting summer.” You just got all three of the things in my header wrong, so I had the urge to just ghost them because you’re not really paying attention to who you’re reaching out to.

Stefanie Hill:                     Applicants ghost for the purpose of, “I’m applying to a ton of jobs and you’re getting phone calls and you’re not answering those phone calls for whatever reason.” Definitely in the initial process when a company reaches out through phone screen, we’ve also seen seVeral students that my have gotten hired with a company. They’re expected to be in training or they’re currently in the organization and all of a sudden, they fall off the face of the Earth.

Stefanie Hill:                     I think a big thing with that and why students are doing that, not necessarily students but just about everybody is doing that, is not only the competition, you may have just taken a job for the sake of taking it, but you like something better.

Stefanie Hill:                     Really focus on your top five companies and try to get in with those companies. Follow up through email if you don’t hear back from them after a week of putting your resume in. Also, after your talks on the phone, after your interviews, respond back to that employer. Court them whenever they’re on campus. Anytime they come, the College of Business, we have employers everywhere. Really trying to court and follow up as much as possible is my biggest advice there.

Stefanie Hill:                     It’s a small world and if you burn a bridge with one person, especially if you’re trying to stay within a certain industry, you’ll probably burn bridges with everybody in that industry because people talk.

Lina Pabon:                        If you didn’t get back, if you were unprofessional, people can remember that and it could potentially affect a future opportunity. You just never want to do that. You never want to hurt your future opportunities. All we need is an email. Not even a phone call. I appreciate it as an employer when a candidate does take the time to send me a quick email to thank me, just, “Thank you for considering me. I have accepted another opportunity.” I’m like, “Great, I wish you the best of luck.”

Lina Pabon:                        To your point, you never know when that person’s gonna back out and you were the second or third or what have you. But you took the time to send out a thank you note, hopefully reiterate your interest, why you’re a good fit for the role, and they might think, “Well, this person, they were interested and they took the time. Let’s revisit that. Let’s see if they’re still available.”

Lina Pabon:                        Nowadays with social media and Indeed and things like that, that’s gonna get out there and that’s gonna affect your branding. We have a best practice where we do try to get back with all of the candidates within three to five business days, whether that’s positive or negative.

Lina Pabon:                        Having that personable touchpoint with them during the phone screen where I try to create that relationship so that I don’t get ghosted.

Stefanie Hill:                     I think millennials are extremely focused on culture. I think that’s one thing that employers sometimes fail to focus on.

Paul Jarley:                         One way companies could maybe reduce the likelihood of being ghosted by a UCF College of Business student would be to spend some time on campus, get students to know them, and the opportunities that they have because they’re not, say, Amazon.

“Casper”:                            I would say be personable, mention their name, make it as unique as possible while not going over the top because the student wants to feel recognized and like they’re not wasting their time. I mean, not to cater to individuality too much, but mainly just show that you are a person on the other side. You’re not a company, you are a recruiter working for a company. You’re an individual and the more personable you make it, I think the more assume I realize, “Hey, I should be courteous to this person rather than blow off a company.”

Paul Jarley:                         It’s my podcast, so I get to go last. Recruiting new employees is time-consuming and costly. It’s easy to understand why companies are looking to new technologies to help keep these costs in check, but it’s a seller’s market right now. People might put up with Vera in the application process when they’re desperate to find work.

Paul Jarley:                         But in an economy with a 4% unemployment rate, that personal touch might be the difference between landing your candidate or waiting by the phone for somebody to call back. Ghosting might be a thing, but it’s not inevitable. Be your own ghostbuster. Spend the time to engage and get to know people because it almost always pays off. What’s your take?

Paul Jarley:                         Check us out online and share your thoughts at business.ucf.edu/podcast. You can also find extended interviews with our guests and notes from the show. Special thanks to my producer, Josh Miranda, and the whole team at the Office of Outreach & Engagement here at the UCF College of Business, and thank you for listening. Until next time, charge on.