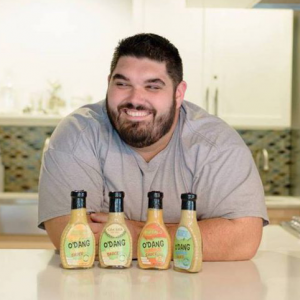 Starting a business with no money or funding could be easier than you think. Jesse Wolfe, founder and CEO of O’Dang Hummus, got his start at UCF with some big ideas and little capital. Several years later, he’s CEO of a multi-million dollar business and has turned the salad dressing industry on its head. But one success story does not mean everyone could do it…

Cameron Ford:                The Google Glass, people started using it out in public and stuff like that, and quickly were scorned as being what were described as Glass-holes. My understanding is they pulled from the market.

Paul Jarley:                       This show is all about separating hype from fundamental change. I’m Paul Jarley, Dean of the College of Business here at UCF. I’ve got lots of questions. To get answers, I’m talking to people with interesting insights into the future of business. Have you ever wondered, is this really a thing? Onto our show.

Michael Pape:                 What we were, I’ll just say, required to do as an entrepreneur with VCs with trying to get, maybe, economic development funds.

Michael Pape:                 So it was a tech-oriented business that I’ve been involved in, was write the business plan, and I have sat down, myself and with my teams, of writing the 40 to 60 page business plan. The fat startup, if I may define it that way, had you do that. Venture capitalists would request it, and they would want to make sure that you saw the plan from beginning to end.

Paul Jarley:                       In the early 1990s, ideals spun out of Stanford, with an emphasis on design thinking. Another decade passed and Berkeley started developing what has come to be known as lean start up. It had a coming out party in 2011, with the publication of Eric Riles book by the same name. But, are universities and business schools really the place to start businesses?

Paul Jarley:                       I had my doubts. We excel at getting rule followers great jobs in companies who are looking for functional talent. We really aren’t geared up to help people who want to color outside the lines, pursue their crazy dreams, even when people say they’re wrong. That said, a quarter of my students say they want to start a business, and students seem to love the lean startup methodology. Cameron Ford, Director of our Center for Entrepreneurial Leadership, has a pretty obvious reason why.

Jesse Wolfe:                     Lean startup, bootstrapping 101. That’s where great businesses, in my opinion, come from because people that start off with too much funding usually have an issue staying on course. When your back’s against the wall is when I feel you think the fastest, the brightest, the quickest and you become the most resourceful. When you have too much money you tend to get lackadaisical in my opinion.

Cameron Ford:                It’s not a miniature version of a company, it’s actually a vehicle, for remaining humble, viewing all of your ideas as hypotheses and going out and collecting data to validate or invalidate these things and move forward-

Jesse Wolfe:                     I had a business planning writing class with professor Michael O’Donnell. He told us we had to come up with a business plan idea and I didn’t want to be a part of a team that wrote for another bar concept. So, I had this idea after I had my wisdom teeth pulled out for a Ben and Jerry’s style Hummus company. And when I started writing the business plan for it, I realized there was this massive gap in that market. It was almost billion dollar category and there was one big contender really monopolizing it. And it was really primed for competition to come in.

Jesse Wolfe:                     I actually started O’Dang Hummus with about a hundred and fifty bucks. My grandmother gave me a food processor, so that was the freebie. And the rest of it was honestly just ingredients and some labels from like a little local printer that hooked me up.

Cameron Ford:                Because you give them something tangible, I always like to tell people a picture’s worth a thousand words. A prototype is worth a thousand pictures. You get something that people can literally see and put their hands on that’s very tactile. That often will enhance the conversation and imagining process for a lot.

Jesse Wolfe:                     And that was the basis you know, it got me in front of people getting a taste testing and samples. And then when it came time to really launch the product and start selling it, I entered the UCF Business competition called ‘The Joust’.

Paul Jarley:                       Rather than seek out a network of advisors that could help Jess grow his business, he went straight for the financial kill. In retrospect Jesse realizes this may have been the biggest he made.

Donna Mackenzie:         I think starting a new business is sort of like waiting into the ocean with waves crashing around you and birds pulling you this way and that.

Paul Jarley:                       Jesse got his offer from the sharks but they took way too long with their due diligence. In the meantime, Publix came knocking. What’s surprising here, is they didn’t want Jesse’s traditional hummus, they wanted his hummus based salad dressing. So he signed a deal, found a packager and had to scale up production without sacrificing quality.

Jesse Wolfe:                     Yeah it was a huge problem. And we called it a sauce. We let people convince us to call it a sauce. It was so jacked up. Yeah, and again but it was such a good learning lesson because we re pivoted to what, I mean it’s always been a dressing. So we relabeled it a dressing, we fixed the formulation, we listened to our fans and we delivered a product that’s bar none phenomenal.

Jesse Wolfe:                     But where I’m at today, I have very strategic, very specific mentors that are in the food space, that know packaging, that know consumer product goods. These are people that are really helping me thrive in my space. Not all mentors are created equal.

Jesse Wolfe:                     Don’t burn everything down around me, you know trying to freak out. I just step back and I go “Here it is.” Right, we have another problem. Instead of panicking and pointing fingers at whose fault it is, what’s the solution.

Carol Ann Dykes Logue: There are companies that failing fast is better for them, I say sometimes it is.

Paul Jarley:                       Carol Ann Dykes Logue is site manager for the UCF incubator program. She stresses the difficulty a lot of the high tech companies have in implementing the lean start up approach.

Carol Ann Dykes Logue: It’s very difficult to apply the lean start up methodology many times. I’m working with very leading edge technology and innovation companies where the first question really is, “Can we make the technology work?”

Paul Jarley:                       That takes money, sometimes lots of it. Then there’s the challenge of getting technologically oriented minds to focus on the value added to the customer. Here’s a recent conversation with one of her clients.

Carol Ann Dykes Logue: And I kept asking him, “Tell me what you think. What’s the benefit of this technology that you are in the process of developing?” Throw something at me that was really a technical capability, I would come back to “Why should I care about that? How’s it gonna help me?” Tell me how it’s gonna help me.

Carol Ann Dykes Logue: A lot of times I use analogies and turn the tables on them and ask them “Alright, share with me a recent buying experience that you’ve had. Tell me what went through your head.” And they can pretty clearly tell you that and then they go, “Ohhhh, I see now.” Yeah I didn’t really care how it does what it does necessarily, I care that it does what I need done.

Cameron Ford:                Well I think in the early part of the process we’re working on with most students. I think for them it’s very intimidating to think about going out and talking to a bunch of people about their idea. They just don’t know that many people that can connect them to the kinda folks that it would be relevant to speak to. It’s one thing if they’re talking about “Hey I’d like to open up a food truck that’ll pull up here on campus and serve sandwiches to students.” Well then you can go around campus and talk to students right, that’s who you’re trying to sell it to. But if you’re trying to do something that might help the elderly or something like that, you need to go out and talk to 50 or 60 people. Where are you gonna find those folks? How are you gonna conduct those interviews? That part of the process can be pretty daunting if you’re a student trying to go and really do the lean start up process really the way it’s supposed to be done.

Paul Jarley:                       Even when you find the right people to talk to, Donna Mackenzie says that the discovery process can lead to conflicting information. And it can be hard to sort out without experienced mentors.

Donna Mackenzie:         Oh that’s the tricky part. You know, you get so much feedback and it’s sometimes hard to discern whether this is the right direction or that’s the right direction. Just giving them the tools but not giving them the guidance and the mentorship to kind of sort through all of that. I think that’s really where you get that analysis by paralysis and it’s hard to get unstuck from there.

Cameron Ford:                Don’t start organizing your resources and your people before you get your story straight. Because if you do that, you’re going to cause a lot of harm. A lot of things aren’t gonna work out, you’re gonna burn a lot of bridges.

Michael Pape:                 The hockey stick. But then there’s a cost associated with hitting each of those milestones. And the investor wants to know how much it will cost to hit that milestone which is the basis for your budget.

Carol Ann Dykes Logue: Sometimes it is. There are companies that failing fast is better for them.

Paul Jarley:                       It’s my podcast, so I get to go last. Reducing uncertainty by employing hypothesis testing in the scientific method is hugely appealing to academics. It’s how we think. But any good, thoughtful researcher knows the limits of such work. Especially when you’re trying to understand how people behave. It’s why having experienced mentors is so important in start ups. It can augment science with experience and increase the likelihood of success. If I were looking for a school to help me start a business, I would want to know much more about their network of experienced mentors then their grasp of frameworks like lean start up.

Paul Jarley:                       Management research can be kind of trendy. And something will eventually replace lean start up as the darling theory of the day. But building a strong network of advisors that can help navigate you through uncertainty is never going to go out of style. What do you think? Check us out online and share your thoughts at business.ucf.edu/podcast. You can also find extensive interviews with our guests and notes from the show.

Paul Jarley:        Special thanks to my producer, Josh Miranda. And the whole team at the office of Outreach and Engagement here at UCF College of Business. And thank you for listening. Until next time, charge on.