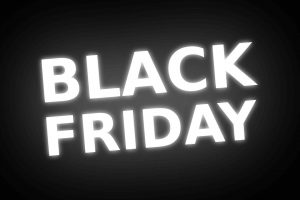 Jahir Hernandez:             They come in waves and I remember specifically that the check out line was all the way to the back of the store and you couldn’t get from one side of the store to the other because that line was so massive.

News Reporter:                Look we were expecting a big crowd. We don’t have the big crowd that we expected. I got up at three o’clock excited to do my first ever black Friday and ain’t nobody here. I am literally upset right now. I don’t know why people did not wake up.

Paul Jarley:                         This show is all about separating hype from fundamental change. I’m Paul Jarley, Dean of the College of Business here at UCF. I’ve got lots of questions to get answers, I’m talking to people with interesting insights into the future of business. Have you ever wondered, is this really a thing? On to our show.

Jahir Hernandez:             My most vivid memories would definitely be that rush I think at around 9:00 a.m. where people kinda get up, they have that turkey hangover where they’re done with that. They come in waves, and I remember specifically that the actual checkout line was all the way to the back of the store and you couldn’t get from one side of the store to the other because that line was so massive. You have people that are super nice that maybe they’ve worked in retail before, they understand the craziness. You also have those other people that are there just to get whatever they want and they’re very upset.

Paul Jarley:                         Who’s responsible? When did all this holiday shopping madness get its start? Black Friday isn’t as old as you think. It started in Philadelphia back in the 1950s, and got its name from police officers who hated being dragged out the day after Thanksgiving to deal with the local shopping madness. It didn’t become a national phenomenon until the 1980s, and by then it was reinvented to be the day that retailers finally got into the black, well, at least that’s the story. Don Unser is a USF alum and retail group president at NPD. NPD is the nation’s leading retail sales data company. If anyone would know when retail companies turn into the black, it would be them. And well Don, he’s a little skeptical of the story.

Don Unser:                         The original roots of Black Friday, it was a point in time at which the retailer turned for the year to be profitable, and there are a lot of myth busting things out there that said did that really happen or did that not happen. I guess back when we had a traditional predictable retail season, when we had just stores and we knew what the season was, we knew what the consumer was going to do, it was this kinda static environment, I think there could have been a relative time on the calendar where there was some profitability.

Sean Snaith:                       Exactly. Neither one of those days mean anything. Matter of fact on Prime Day most people don’t even remember the origin of it, but what Prime Day was is Amazon saw that Jet was about to launch their platform and so they did a Prime Day to put out great deals that would squelch the launch of Jet.com. And that was Prime day. So, the origin of these two days are interesting. The fact that Single’s Day did as much volume as it did and does is absolutely fascinating.

Anand Krishnamoorthy:               Cyber Monday is the most attractive online shopping day of the year. Brings in I think about six seven billion dollars or so.

Paul Jarley:                         Anand’s data tells me, you’re going holiday shopping. If you can’t help yourself and feel the need to battle the crowds in search of that bargain, here’s some things to keep in mind. First, our resident economist Sean Snaith tells us, “It’s going to be a big holiday season. People have money in their pocket, they’re feeling good, and they’re ready to spend.”

Don Unser:                         We think that the Smart Speaker, the Echo products, and the Google Home products will continue to be very hot this holiday. We think stereo headphones are gonna be very hot, really led by Apple Air pods. Those are just absolutely on fire right now, and for the last year, year and a half those have been in heavy allocation. Retailers haven’t been able to get enough and now they are. We also think that anything having to do with the home categories are gonna be really strong. The Instant Pot, last year, which was a super hot product, and the air fryers. These are two convenience splays basically for the consumer. Both of those will continue to be very hot this year.

Anand Krishnamoorthy:               I think [inaudible 00:08:17] which is a soft plush doll that comes in a hard package so you’ll have to soak it, rinse, then you’ll dry, but then it becomes a plush doll after you do all of that. There’s another, I think it’s called Hatchibabies, so now instead of Hatchimals it’s now Hatchibabies where you can actually get a boy or a girl from an egg so they’ve taken parenting to the kid’s level with them.

Anand Krishnamoorthy:               Traditionally shopping on Black Friday has never been about peoples showing up at three in the morning and waiting in lines. The peak shopping season-

Anand Krishnamoorthy:               Not much of the sales comes from there. Much of Black Friday sales actually happens in the early to mid afternoon. So, peak Black Friday shopping time in terms of foot traffic is between two and four in the afternoon on Black Friday. It is not the mornings.

Anand Krishnamoorthy:               The numbers tell you that you’re more likely to get killed shopping for a door buster on Black Friday than from a shark bite. Alright, more people die in stampedes on Black Friday.

Anand Krishnamoorthy:               Today, holiday shopping on Black Friday is more engaging because you can now have different people in the family go to different stores, communicate on the phone, and extend information that expands the shopping options for the family and friends.

Anand Krishnamoorthy:               Friday online brought in about five or six billion dollars last year. So, when we talk about Black Friday, the old definition of people walking into the stores may not be doing its thing, but people are still shopping in droves online on Black Friday. Traffic on Black Friday doesn’t appear to be significantly off either.

Anand Krishnamoorthy:               There’s a lot of store roaming going on. They find out what’s going on and then they go to a lower price to a location online, don’t have to leave the house-

Jahir Hernandez:             I think it definitely still is a thing. I think people nowadays are always lookin’ for like one deal. Maybe there’s something that you really want that’s in Best Buy at may three in the morning that you’re willing to get, so I think it’s still a thing.

Anand Krishnamoorthy:               Yes, and no. Black Friday is not what it used to be in terms of retailers becoming profitable. Black Friday’s meaning has changed. It is not retailers turning a profit that day. It is not about bringing people into the stores at three in the morning. It is also moved online.

Jahir Hernandez:             Personally, I procrastinate as much as possible and online.

Jessica Dourney:              No, I won’t be there cuz I’ll be watching the UCF Knights our national champs playing in Tampa.

Paul Jarley:                         Notice, there’s not a sense of urgency in any of their voices. When shopping was local, scarcity was a real concern, and retailers could play on this. If you couldn’t find that coveted holiday gift within a reasonable drive of your home, you risked disappointing a loved one, and that drove you to get up early and get it done. Today, shopping is global, and with free two day delivery and stiff competition for the consumer dollar, people have plenty of options other than getting up at three in the morning to get that gift before the appointed time.

Paul Jarley:         Tina Hand nailed it. Sorry Black Friday, you’re just not worth it anymore. What do you think? Check us out online and share your thoughts at business.ucf.edu/podcast. You can also find extended interviews with our guests and notes from the show. Special thanks to my producer Josh Miranda and the whole team at the office of outreach and engagement here at the UCF College of Business. And thank you for listening! Until next time, charge on.