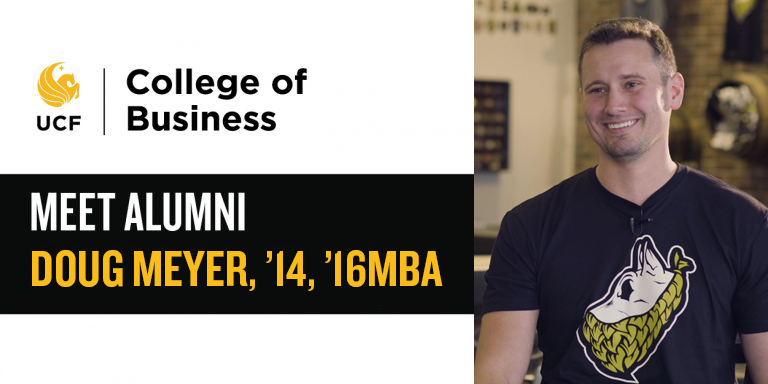 Opening a thriving brewery in Baldwin Park, catering to first responders, veterans and anyone who loves good craft beer, makes Doug Meyer a successful UCF College of Business alumnus. Serving our country is courageous and selfless; often schooling and careers are put on hold. Doug Meyer didn’t mind, so he could serve deployments in Iraq and Afghanistan for four years. After his active duty service, he completed his bachelor’s degree in Psychology and then an MBA, both at UCF, and later opened a craft beer brewery for the community – Doug Meyer is our UCF Alumni Spotlight.

While many UCF College of Business students intern with companies, Doug went a different route. He soaked up all the information he could during and after class networking. He knew what he wanted to do, having developed a lot of skills during his time in the military. So, he spent time with professors to find out how to open his own brewery. Thanks to an outstanding MBA program at UCF, his business plan was created with students from his classes. The brewery was an idea he thought of after leaving the military, where he served as a Rifleman and he missed being around his military buddies. He felt there needed a be a place where veterans, responders, and lovers of craft beer could hang out and network.

While a student at UCF, Doug was involved with the Veteran’s community and VARC- the Veteran’s Academic Resource Center on campus. He attended various workshops and events through this program. VARC serves the Veteran community and offers a place for students to study and resources for them to be successful, complete their degree program, and meet their needs.

Tactical Brewing is named after his time in the military and he enjoys creating good quality beer and educating the community on how it is made. He feels Tactical Brewing is a great place for beer lovers and people to network in the community. Doug plans to stay in Orlando and feels that UCF is a very important part of the community. He enjoys using the resources he has to give back to UCF and the city beautiful-Orlando.

Why did you choose to attend UCF?

While serving in the military, I would always visit friends attending UCF. Immediately, I fell in love with the environment, people, and academics that the University had to offer. Once my Active Duty ended, I moved to Orlando with a couple of Marines I served with, the sole purpose being to attend UCF.

How has your UCF degree helped in your career?

My UCF degree helped build the foundation for starting my own company. While earning my MBA, I directed almost every class and group project towards opening a brewery. I would stay after class and get advice from some of the great professors I had. I also created the entire business plan alongside fellow students from all different walks of life. The networking was phenomenal as well and I continue to be in touch with several of the students I met while getting my two degrees from UCF.

What extracurricular activities were you involved in at UCF?

I stayed involved with the Veteran community at UCF. VARC had several networking events and workshops I attended.

What is your favorite UCF memory?

My favorite UCF memory is walking across the stage and receiving my MBA, (I may or may not have been wearing light-up shoes). It was such a proud moment to transition from being a Rifleman in the infantry to earning my Master’s Degree.

What advice would you give current students?

Treat going to class like a job and NETWORK. College is fun, but it’s very important to take it seriously and make as many professional contacts as you possibly can. UCF has so many resources, take advantage of it.

What do you do?

I’m the CEO and Founder of a brewery in Baldwin Park (Tactical Brewing Co.). I opened this brewery with my partner whom I met at a Home Brew Club seven years ago. I brew and run company operations which are responsible for the overall company’s success.

Why do you do what you do?

First off, the craft beer industry is fascinating. It’s not very often you can start a business and maintain friendships with the majority of your “competitors.” This industry collaborates and perpetuates a culture that supports fellow independent breweries. A big passion behind the brewery is to be able to support fellow veterans as they transition back into the civilian world and first responders as well. High-quality beer is important to us and there’s always something new to learn. I love it!

What do you like most about what you do?